We became alarmed at the changes made in the lobby of the building. We ask that the historic desk and Museum graphics be reinstated, along with the displays of Neutra projects and books for sale, that used to line the shelves.

Please sign the petition below to pledge your support.

As of May, 2016 word has come down that the OCC board ‘after careful consideration’ elected to destroy at least two and maybe three of the original Neutra buildings the above petition was designed to save! We’d achieved over 350 signatures on this petition to that point, which were obviously insufficient to sway these vandals from their dastardly course!

This latest desecration of some of the few remaining Neutra examples, gave rise to a new Institute Project. We’re calling it

THE NEUTRA PRESERVATION WALL OF SHAME

On it will be emblazoned the names of the aggrieved projects, the date they were despoiled, and the names of the perpetrators, so that they can be publicly shamed for their lack of appreciation of the art objects of which they were supposed to be caring stewards!

Stay tuned for more new on this, and feel free to continue building up signatures on the above petition; 1000 would still be great!

In response to a NY Times article about Marx:

In the mid 50s our office designed a large residence in Havana. Through dad’s contacts, we somehow attracted Marx to offer a landscape design for that project.

In 1955, we were working on the LA Headquarters building for the Amalgamated Clothing Workers Union. Dad convinced Marx that this would be a great opportunity for him to show his mural talents for LA. We have a picture of Marx putting the finishing touches on that piece;. the only live example of this man’s work in the US! It would appear that the paint was applied directly to the plastered surface, as opposed to a canvas being adhered. 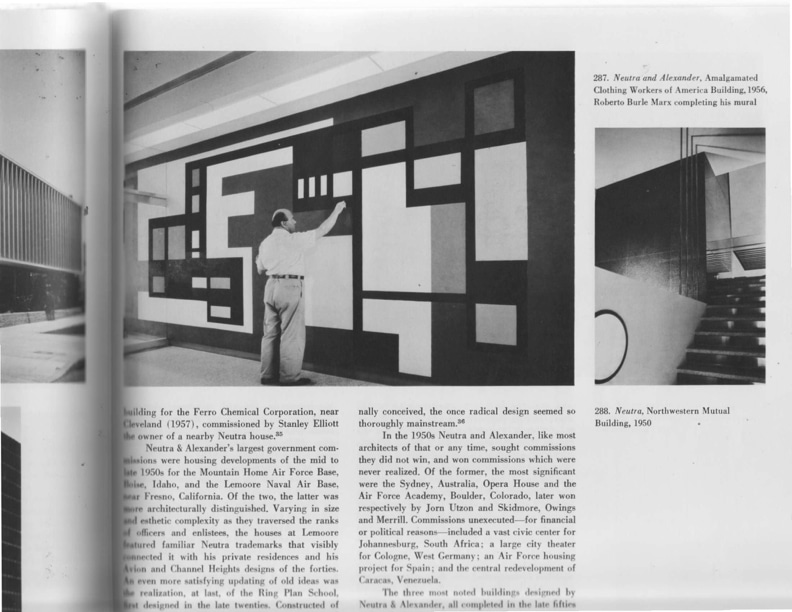 We have tried repeatedly to make contact with the current owner, who has avoided us; who knows why, but we suspect he does not want to know about this treasure in his midst for fear of the responsibility this might reveal. We’ve reported this to the Mural Program of the City, but no one seems to have an idea how and under what authority something might be done here.

First, of course, it would seem, an experienced archeologist should scrape the white painted surface to see if signs can be found of this art work underneath. But what if it’s true; what to do next? It is not practical to remove this wall with the plastered surface intact, I would say, altho with enough funding anything is possible. But what to do with it if and when? I don’t think this owner would want to be bothered, even if funding were found for a restoration.

Proceeds will continue to go towards causes of preservation, with special emphasis continuing on into next year towards the events to be scheduled for Earth Day week, ending Sunday, April 23, 2017 and ‘Preserving VDL’. This iconic monument will continue to be in need of repairs of all kinds, and desirably an endowment!

To learn how you can become involved we have all the information on our Volunteer Opportunities page.

The Institute is assembling a database of all current Neutra building owners. Our goal is to create a mailing list for news about the preservation and conservation of what remains of the Neutra oeuvre.

If you have any information, please send it to Dion Neutra. Please include phone numbers, fax numbers, and e-mail addresses if available.

The original motivation for this show was the threat in 2010 to the Mariner’s Medical Arts Complex in Newport Beach, (still at risk). In 2016, we have the threat to several of our buildings at Orange Coast College, where the Board there has declared itself ready to destroy about three of the rare examples we were able to get built there in the early 50s Why? Not to build on their sites, but “to clear the center of the campus for a green area!” or for parking.

This is all scheduled for some time this year. Aside from individual letters to the college, we’ve come up with a petition whereby you can sign, making any remark you care to, about the value to history, to have these examples survive.

This would appear to be one of our last hopes; would 1000 signatures sufficiently impress these folks to pressure them to change course?

The Life and Death of the Neutra Gettysburg Cyclorama Center 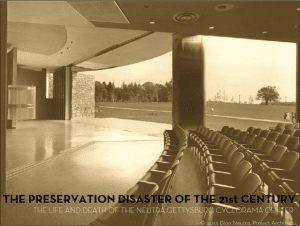 In the late 50s, the Neutra and Alexander firm was selected to design what became the signature example of a National Parks Visitor Center. The one for Gettysburg, Pennsylvania became the darling of Richard Neutra together with his architect son, Dion, who acted as Project Architect, throughout the preparation of documents and later during construction, which was finished and dedicated in 1962.

END_OF_DOCUMENT_TOKEN_TO_BE_REPLACED 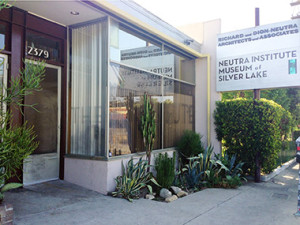 Please join us for a closing reception, Saturday evening, October 4, from 7PM to 10PM, at the new gallery/museum housed in the iconic Neutra Office Building of Silverlake
2379 Glendale Boulevard,

We had a great turnout for our inauguration on August 21; 250 people at peak! While sales and donations were good, we’re going to need to keep the momentum going financially in order to make this museum/gallery on ongoing reality for the community. Thank you for all the support shown.

To keep the museum open, starting with weekends, we’re offering an opportunity for co-workers to occupy two stations in the lobby. Bring your laptop and man one of these two spots during normal office hours. Participate in the creative energy of this historic building at no cost, and help us hold open for visitors at the same time! Send resume and get details from dion@neutra.org

Update: 10/21/2016
Our 1958 Connell House in Pebble Beach continues to be in jeopardy, despite it’s having been listed on State and National lists as a valued asset. All this has not convinced the owner to back off her determined program of demolition and replacement by a McMansion. We continue to rely on local champion Sally Aberg for current status. She can be reached at forthecolors@comcast.net

Our 1958 Connell house in Pebble Beach is in jeopardy! Funds are still needed to complete its nomination for National as well as State Monument status. The hope being that such would convince the current owner to move on, and find another site for its McMansion!

We continue to support the sterling efforts of Sally Abord, who has organized the fund raiser through:

Everyone; let’s join and pledge $10; more if you can! $3000 needed NOW!
Prevent another Gettysburg!

Von Sternberg Residence: early 30s example of pioneering modernist design by Neutra. Destroyed in 1972 because of management issues and ultimately to house tract of houses.

Watch the video below of the $100,000,000 Sho Hondo Buddhist temple erected to last 1000 years in early 70s destroyed in 1998 because of displaced egos in religious community.

The Sands, Las Vegas: early example of Wayne McAllister design removed to make space for larger and more profitable hotel with no history.

Laemmle Building; Hollywood and Vine; 1934. Drastically altered starting about 1940; might as well have been demolished. Was finally lost in a fire in 2008. In Dion’s book ‘The North West Corner: Hollywood and Vine’ he proposes building a design he found that Neutra had rendered in 1926 for that same corner; an 8 story building called ‘the Hollywood Fashion Center’. That could replace the current surface parking lot there, with multiple levels of subterranean parking below.

Pennsylvania Station, NYC 1915 McKim Mead and White . Destroyed 1965 Despite massive protests to build Madison Square Garden; itself being redeveloped as we speak, along with a new entrance to the subway station via a Library building across the street by the same architects.