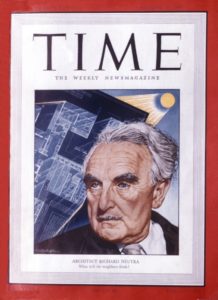 Starting in the early 1920’s Richard Neutra was one of the first generations of modernist architects who moved away from the architecture of adornment to one committed to the needs, of all kinds of people, the use of new technology to make good design affordable and responsive to climate as well as integrating nature and the landscape into the built environment. He was born and educated in Vienna and was deeply influenced by proto-modernist architect Otto Wagner who had, in 1896 written the book “Modern Architecture.”

Neutra studied with the early modernist Adolf Loos. Like his older school friend Rudolf Schindler, he admired the Prairie Houses of Frank Lloyd Wright and intended to emigrate to the USA in 1913 but was caught up in the Austrian army during WWI. After the war, he briefly worked with the landscape architect Gustav Amman in Switzerland and then as a town architect in the small town of Luckenwalde where he designed, in 1922, housing and a landscaped forest cemetery. He was hired by Eric Mendelsohn and as chief draftsman was responsible in 1923 for four experimental houses in the Zehlendorf suburb of Berlin. When Mendelsohn and he won an award for a library project in Palestine he used the money to emigrate to the United States in 1923.

He met Frank Lloyd Wright at the funeral of Louis Sullivan and was offered a job with Wright where he and his wife Dione and son Frank stayed for half a year in 1924/25 on projects which were not ultimately constructed.

He then was invited to join Rudolf Schindler in Los Angeles. In 1927, the two submitted a proposal for the League of Nations which was featured in an exhibition of the Deutsche Werkbund along with those of Le Corbusier and Hannes Meyer. In Hollywood, they also completed a forty unit reinforced concrete garden balcony “Jardinette” apartment house in 1928-29. Dr. Philip Lovell, who had built several structures with Schindler asked Neutra to design a city residence and site for Leah Lovell’s progressive school which became known as the Lovell Health House. The design began in 1927 and the structure was completed in 1929.

During this time Neutra completed a German-language book “Wie Baut Amerika” (How America Builds). This book and his early innovative buildings led in 1930 to lecture tours in Japan, Austria, Switzerland, Germany, and the Netherlands as well as a two-week visiting professorship at the Bauhaus.

In 1932 Neutra’s work was featured in Henry Russell Hitchcock and Philip Johnson’s “International Style” exhibition at the Museum of Modern Art in New York. In the same year, the Dutch industrialist Cees van der Leeuw loaned him money to design a multifamily live-work space where he worked and lived for forty years. Large overhangs with retractable awnings controlled the influx of sunlight. After his death and that of his wife Dione, the compound was left to the College of Environmental Design at the California Polytechnic University at Pomona and is available for public tours and art events. It became a National Historic Monument in 2017 as the “VDL Studio and Residences.” Architects such as Harwell Harris, Gregory Ain, Rafael Soriano, Donald Wexler, Erich Schneider Wessling and his son Dion began their careers there.

After the 1929 Jardinette apartments, Neutra’s interest continued in multi-family dwellings and apartment houses which brought tenants close to nature. This continued with the 1938 Landfair and Strathmore apartments, the 1942 Kelton 1947 Kievman, 1950 Glendale, and 1964 Poster apartments.

Starting in Leah Lovell’s home school and with the 1927 proposed metal prefabricated Ring Plan school with walls that folded open to allow activities in outside gardens, Neutra continued to design innovative indoor/outdoor schools Examples are the 1935 Corona Avenue School, the 1938 Emerson Junior High School, the 1942 prototype schools on the island of Puerto Rico, various schools in California including the UCLA Laboratory School and the Richard J Neutra Ring Plan School on the Navy base at Lemoore California. The Puerto Rico schools had a wide influence throughout South America where he toured in 1946. There he found innovative approaches for sun control and he imported the idea of vertical sun louvers to the USA. These were first used at the Kaufmann Desert House and also at the Los Angeles Hall of Records.

Low cost and prefabricated housing was a focus from the beginning, starting with the Lovell Health House, the 1934 Beard metal panel house, the 1936 Plywood House, and WWII worker housing communities at Avion Village outside Dallas TX and Channel Heights near San Pedro. This first twenty years of achievement as an early modernist landed Neutra on the cover of Time Magazine in 1949. In the early 1960’s he designed neighborhoods of standard designs near Frankfurt and Hamburg.

The realities of politics and economics in the United States meant that large and small single-family houses were the core of his practice the most famous large commissions being the 1935 von Sternberg, the 1938 John Nicholas Brown, the 1946 Edgar Kaufmann, 1948 Tremaine and 1953 Moore, 1968 Brown Houses. Smaller houses like the 1937 Grace Miller House, the 1942 Nesbitt House, the 1946 Case Study House, and the 1955 Perkins House won awards. There were more than 200 individual residences in all.

Starting in 1950 with partner Robert Alexander, they did city plans, military housing, churches, medical facilities, an Embassy in Karachi, a number of college campuses, and visitor centers at Gettysburg and the Painted Desert (the latter became a National Historic Monument in 2017). In 1965 his son Dion Neutra became a partner in Richard and Dion Neutra Architects completing a number of residential designs in Europe and a large dormitory at the University of Pennsylvania.

Neutra was convinced that evidence about how the nervous system responded to the designed natural and built environment could lead to designs that enhanced wellbeing and health. His 1953 book Survival Through Design addressed these issues and was featured on the cover of the Saturday Review of Literature. Neutra, through a number of other books and numerous articles, promoted the cause of well-researched designs that served humanity and the planet. Neutra received a posthumous gold medal from the American Institute of Architects as well as a number of international awards.

He set up the Neutra Institute for Survival Through Design in 1962 to further research into the effects of the designed environment.

Signup for our email newsletter