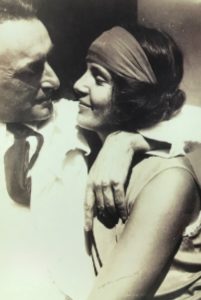 Dione Niedermann Neutra was born in Munich, Germany where her Swiss electrical engineer father, Alfred B. Niedermann, was then working. The family soon moved back to Zurich, Switzerland, her father’s home town. This is where she grew up. Her mother Lilly Antoinette Muller Niedermann was from the little town of Lehr in East Friesland near the Dutch border. Alfred, a skilled amateur pianist, was the son of the elder Alfred Niederman, a xylographer and self-educated painter, poet and novelist. Dione was named after the protagonist in one of her grandfather’s novels. She was the oldest of four girls, all of whom grew up in a free-thinking, intellectually curious, musical milieu. She played the piano, the cello as part of her father’s active chamber music soirees and left high school to study singing in a conservatory.

The Niedermanns met Richard Neutra in 1919 after WWI, when he was staying at a convalescent home on lake Zurich run by a family friend. He was working at a plant nursery with the landscape architect Gustav Amman and was invited for lunch with the Niedermann family once a week. Dione was eighteen and Richard was twenty-seven and they soon fell in love. Because of his difficulty in finding work in post-war Europe, they only married at the end of 1922. Their happy marriage was to last 48 years until his death in 1970. At the end of her life, Dione published a book of translated letters between Richard, Dione and Dione’s mother who had taken Richard under her wing. In the introduction to the book she said:

“…these letters tell the story of not only the making of an architectural career but also the making of a lasting marriage, for many of these letters were first and foremost love letters that span our meeting, our courtship and the first ten years of our marriage. They represent the establishment of a line of communication that both formed the foundation of a marriage and helped it to endure for forty-eight years, vital and productive to the end.” 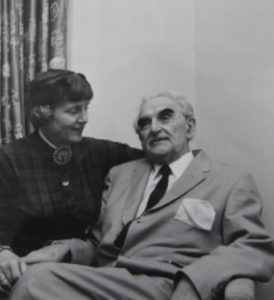 What is clear from these letters is that Dione was inspired by Richard’s commitment to an industrialized, socially responsible, nature-embracing architecture and wanted to join his mission. She felt that he respected her musical aspirations as well. Later she was to say that a happy marriage was based on the partners’ determination to help each other to fulfill their respective potentials. Judging by her own assessment and photographs at the beginning and end of this marriage there was strong physical attraction as well.

She summarized her approach to this marriage in a November 1923 letter to Richard’s sister:

“I could learn slowly that Richard was not only a man who loved me very much, but before all else an artist with inner obligations. Never to forget this was my evening prayer. I also realize that his character was such that he might omit certain decisions vital to his career out of deference for me and never to permit this was my firm resolve. I had to learn to be an efficient house wife. During our three months together in Berlin I had a chance to see whether I was capable of enduring Richard’s periods of depression as well as the ups and downs of his profession, whether I possess the necessary counterbalance and cheerful disposition required. Presently I again have time to digest the experiences of my first year of marriage and to think how I can improve; also to realize what it will mean to be a mother. With one child it will not be so hard, but with several children it would be difficult not to lose oneself in household chores. I must always keep in mind that first and foremost I am Richard’s wife and counselor, as he calls me to my great pride, and that I shall be alone with him in the end-just as we were alone when we started.“

She raised her three sons, Frank who was autistic, Dion and the much younger Raymond while maintaining her musical skills and while working as Richard’s executive assistant. Much like Aline Saarinen, Eero Saarinen’s second wife, Dione was in charge of publications, maintaining contact with their ever-widening network of people in the design and scientific worlds, keeping copies of all correspondence. At the beginning she typed the manuscripts of his books. Later she was in charge of the several secretaries who were needed for correspondence, articles, speeches, book manuscripts and architectural specifications as well as tending to the family’s expenses. She oversaw his schedule both while in Los Angeles and on their many trips. 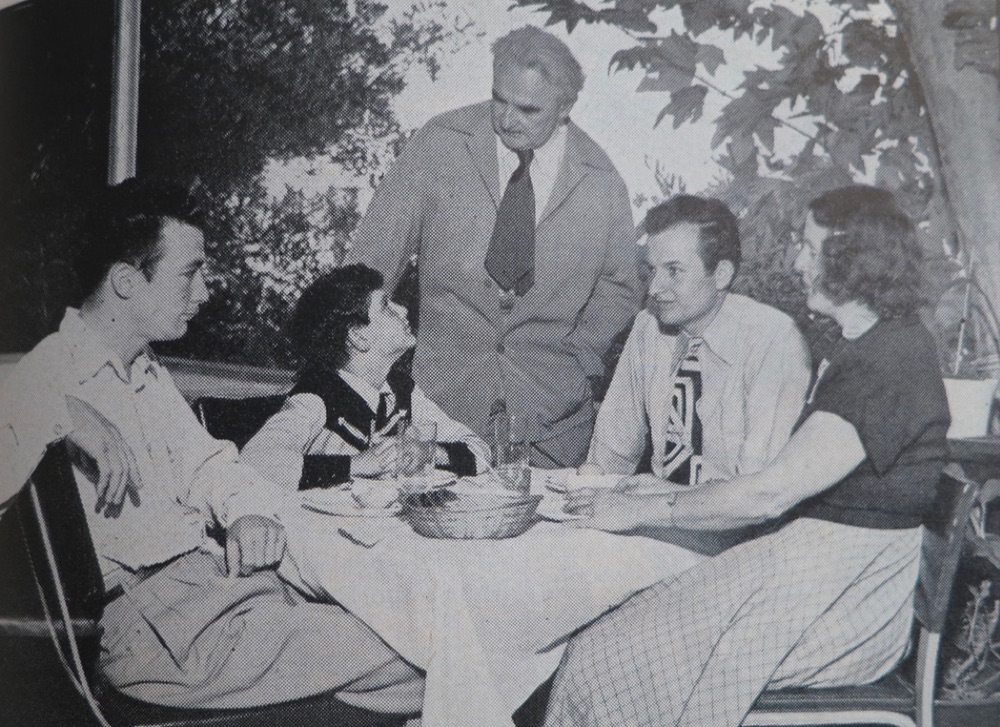 As immigrants the Neutras resolved to make contacts in Los Angeles society by using their unusual home as a magnet for social events, often inviting Los Angeles people along with distinguished international visitors who knew Richard Neutra from his publications or frequent international lecture trips. They would sit on the couch and on Neutra-designed chairs, eating off of trays specially designed by Neutra. Mrs. Neutra kept a diary of visitors between 1938 and 1963 commenting on the conversation, the food she served and the songs she sang for them. There are more than 300 names on this list, including among others, Fernand Leggier, Man Ray, Isamu Noguchi, architects Alvar Aalto, Jorn Utson, Siegfried Gideon, Bernard Rudovsky, Frank Lloyd Wright, Serge Chermayeff, Charles and Ray Eames, Victor Gruen, Lazlo Moholy-Nagy, Raphael Soriano, J.R. Davidson, historians Henry Russell Hitchcock, Charles and Mary Beard, Carey McWilliams, ceramists Otto and Gertrude Natzler, photographers Edward and Brett Weston and cultural figures such as Emil Ludwig, Grant Wood, Chet Huntley, Robert Hutchins, Josef von Sternberg, John Nicholas Brown, John Entenza, and Vice President Hubert Humphrey. She served as hostess for gatherings of the League of Women Voters and other groups. In addition she and Richard welcomed the parade of unannounced architects from around the world, learning to whip up impromptu meals for them.

She kept a diary and wrote yearly letters to their friends with the sense that she and Richard were making history. Her enterprising nature meant that she was an important sounding board and participant for important family and career decisions. While Richard alternated between depressed and optimistic cycles, Dione had a steady and optimistic nature and helped him to keep moving forward.

After his death Dione, who was then seventy, began taking cello and singing lessons again and gave concerts and participated in chamber music camps in northern California. She reviewed hundreds of her own and Richard’s handwritten German letters written between 1919 and 1930, typed them and then translated them into English. With great persistence she found a publisher for them (Promise and Fulfillment: Southern Illinois University Press. 1986). She was approached by the Oral History Program of UCLA and was interviewed by the young Lawrence Weschler about her life with Richard Neutra. This oral history provides a unique record based on her memories as a participant-observer as guided by her diaries and letters (https://archive.org/details/totelltruthoralh00neut). She was also responsible for finding a distinguished editor, William Marlin, to edit a series of unpublished essays by her husband and find a publisher for them (Nature Near: Capra Press 1989). For this, she solicited a forward by the former editor of the Saturday Review of Books, Norman Cousins. As her tangible legacy, she left her diaries, letters and family photographs as well as her home, the Neutra VDL Studio and Residences, to the School of Environmental Design at The California Polytechnic University at Pomona. Dione Neutra was Richard Neutra’s Boswell as well as his partner.

Raymond Neutra interviewed by his son Matthew about Dione Neutra as a mother, partner to her husband, and musician

Signup for our email newsletter